There is good new, there is bad news,  and there is more good news.

First the good news…we are happy to report that after a great deal of thinking, processing and observation, Jon was able to give the local authorities a few more pieces to the puzzle.  He noticed the order/sequence of numbers and letters in plates and gave new troubleshooting info to our local police.  The partial plate became a usable plate letter/number combination and the officer on the case located, questioned, and confirmed the suspect.

On to the bad news…this person was having medical issues the evening of the event and was reportedly out of control.  I say “bad news” because we don’t hope the worst for anyone and truly want this person to get the attention they might need.  In the beginning I was waving my magic emotional wand and transporting this person to places destitute and chaos riddled.    If it is true that health issues were involved, I was quick to judge.  But hey, it was my child after all that could have been seriously injured.  So,  I’m hoping for some leeway in criticism.

Finally, more good news… Where do old cars and their valuable parts go to die?   A St. Louis pick and pull can answer that question.  In true Nuessle spirit a new bumper has been fashioned out of an old discarded one.      A bumper was found, made whole again, and in the span of 9 days father and son made the best of a very bad situation.  We are collectively happy about the outcome.  Thanks to everyone for their prayers and well wishes.  Thanks to Jon who didn’t give up.  And kudos to Brad and Jon for working together in the “do-it-yourself” work ethic and a “people might sometimes suck, but we’re gonna make your car look good again” way of thinking that is oh, so  familiar in the Nuessle household.  Drive on Jon Nuessle!

Inside and out it was bad. 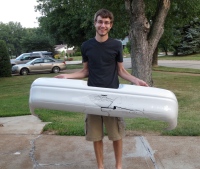 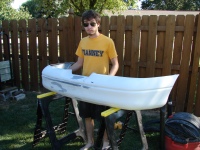 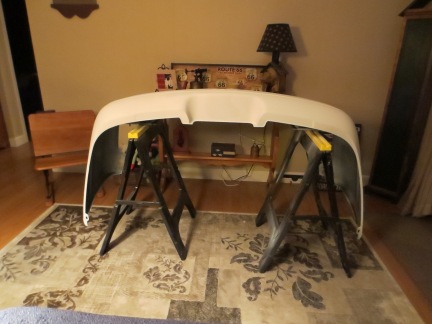 Phase 1 of the Bumper in the living room, no problem! 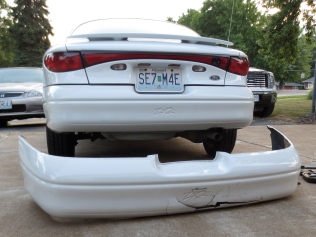 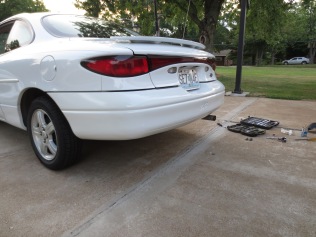 Love cars, love writing, love family...that about does it.
View all posts by Debbie →
This entry was posted in Journal, Off the Road and tagged bad news, bumper to bumper, Ford ZX2, good news, justice, pick and pull, scrap yard, work ethic. Bookmark the permalink.